This week, the #MSSundayFunday prompt was “One good thing that’s happened in your classroom since the start of the school year.”  I was excited about the prompt, and on Thursday, I had a few ideas for what I’d write about: the pretty, popular girl that took the shy 8th grader under her wing and taught him about how to use the netbooks in the classroom.  The underachieving students who embraced the challenge of learning algebra through Math’s Mates.  The students who actually said “Thank you for teaching me today.”

However, on Friday, the whole world changed and what I thought was good got turned upside down. 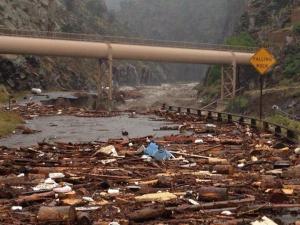 This is the Big Thompson river, which is about 15 miles south of where I live.  Everyone around here knows the story of the Big Thompson flood of 1976, the stuff of legends.   About 200 people were killed in a monstrous flash flood. The entire canyon road is new since ’76 and was elevated 12 feet over the riverbed to avoid just this kind of calamity again. We are very acutely attuned to the risk of flash floods.  Even though a lot of flood mitigation work has been done, our senses are finely tuned to the monsoonal storms of late July and early August.  NEVER in mid-September.  Never.  Never so widespread and so much at once at such a strange time of year.

It started raining hard Thursday, and by the time school let out, Friday’s school day was cancelled. I was absolutely glued to any piece of information I could gather.  It was a terrible cycle of watching news, surfing Facebook and Twitter, watching videos and viewing images, hearing the gut-wrenching stories, and then playing Candy Crush to numb my emotions.  I tried to get a little grading done.  I was mostly unsuccessful.  We had a dry house and a safe neighborhood, but we could not leave town due to road closures, landslides, water over the roads, and to not interfere with emergency responders.  So we stayed, and I felt guilty about our dry house and good fortune, and I watched the horror playing out, first in the mountains, then in the foothills, then over the plains.  They say the guilt is a normal part of the trauma of a natural disaster.  I didn’t expect it to be so powerful.

I spent a lot of time reading and watching the news, for lack of anywhere to go, any way to help, or any motivation to do anything else.  I felt useless and helpless.

I made a map, because my out-of-state family and friends don’t fully understand where I am and where the flood damage happened.  I didn’t make this map realtime, but as news came across on Twitter or Facebook, I mentally catalogued where the damage was.  Here’s a Google Map I made of the devastation around us, again just based on my recollections. I know there is a ton I missed.  What I want you to notice is how many communities this affected.  My home, and my school, are in Fort Collins but in between two river valleys.  We dodged a blow.

The water icon means there were flooded homes.  A red pin or other icon indicates road damage or infrastructure damage.  It is not a typical flash flood, which happens in one river valley – it seemed to be everywhere at once.

The stories started coming in, and some worrying and waiting.

A dear friend, a teacher at a neighboring elementary school had her school’s entire group of fifth-graders at the YMCA of the Rockies in Estes Park.  Their communication was cut off. The entrance to the camp started to crumble.  Buses and SUV’s drove soggy, winding mountain roads to retrieve the kids and get them to safety, and the kids and families were grateful.

A co-worker sent an e-mail on Friday saying the waters were rising, but she was safe and had enough food for a week, and then we didn’t hear from her for days.  She sent an e-mail on Sunday letting us know the roads had all been destroyed but a National Guard Chinook was going to pick up her husband, her tiny son, and her on Monday.. and they were so grateful.

Another co-worker was hosting a family at his house that had their home destroyed by floodwaters and were evacuated by helicopter. They were soggy and needed clothes, but were grateful.

Our new head custodian had spent the weekend sandbagging a middle school and elementary school in the north end of town, fruitlessly it turned out.  Families from that attendance area are still stranded at the head of Rist Canyon.  Their homes, saved from the High Park Fire last year, now have to be evacuated because there is no access to them from the damaged roads.

Our office manager’s parents were stranded in Estes Park with water in the basement.  But, she emphasized, the water was clear water… and some people had lost everything… and she felt so blessed and grateful. 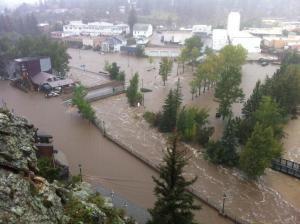 The band director is good friends with the band director in Lyons, where they lost all of their instruments, indeed the school was underwater, and are looking for replacements and help with cleanup and reconstruction. 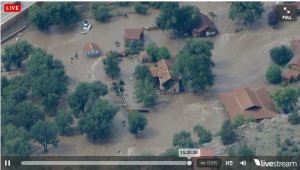 Lyons flooding. Not the school, but other structures in town. Lifted from Sky Fox live cam

Our health tech is a regional coordinator for the Red Cross, had been without much sleep for two days and was the go-to person for the local evacuation shelter.  She said they had been overwhelmed with donations of material goods and volunteers, and were so grateful.

I stopped by the local evacuation shelter with air mattresses and diapers, a donation that felt so inadequate, but the attitude was very much one of gratitude… humble gratitude everywhere.

Today is Monday, and we had the day together as a staff for a collaboration today – a healthy day back at work.  We processed the events of the weekend and bonded a little.  We expressed a desire, maybe even a need, to do something. All the while, rescue helicopters droned overhead. They were graced today with clear, cool weather, and they drew people out of their homes, knowing it could be next spring before they make it back.  How could you leave?  And yet they did, all day long.  I now know the difference between a Black Hawk’s whirr and a Chinook’s thum-thum-thum.  All day they headed into the mountains.

Chinook helicopter, likely with relieved people and pets on board. Photo taken over my house

Communities are coming together to help, and we will too.  We tossed around ideas. We’ll plan with our students for how we’ll rebuild the community.  We’ll move mud, pump sewage, pull out carpet, dig trenches.  I’ll get over my guilt at being spared and will dig in to help.

I’d like to encourage anyone reading this to please make a donation to the Red Cross of Colorado, or the Salvation Army.  Their trucks have been everywhere disaster is, helping everyone and anyone.  Many people are going to weather through this just fine. There are many who need real help and could have a long winter to get through before being able to return home.

In the midst of all of this, there are not one but TWO good things: gratitude and hope.  The students and I will have to work with that.  They come back tomorrow, all of us changed from the experiences of this weekend!

The open question on my mind, is this.  I’m curious how you would answer it.  Tomorrow morning, I’ll walk into the classroom to 30 pairs of twelve-year-old eyes on me.  How do you begin your first academic class after a weekend like what these kids, and their loved ones, have been through?  What do you say and what do the kids need you to say?  Do you get right to the math and enjoy the distraction of a good word problem?  Do you process?  If so, for how long, in what way, and with what purpose in mind?  Chew on that, and I’ll have to let you know how things went when I figure it out.

Posted by dawndup on September 16, 2013 in Outside the Classroom, Student Stories

2 responses to “One Good Thing”